Everybody was there. Actors, house managers, directors. Folks I’ve met in and around Boston theater over the past twenty years. So many theater insiders lent an expectant buzz to the Huntington Theater’s opening production of Sherlock’s Last Case. I wondered why they were in the audience rather than behind the curtain. Same reason, it turns out, that I was there. The Huntington Theater distributed a rasher of comp tickets to ensure an opening night full house; and theater mavens gobbled them up. 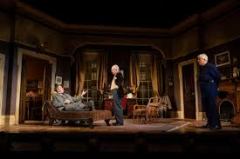 Sherlock’s Last Case is an amiable farce, littered with witty lines that evaporate as quick as the audience giggles. Like all Huntington productions, the set was an elaborate creation (in this case Victorian bric-a-brac run amok), the costumes spot on, the acting tight. It was enjoyable as…as… as… sitcom, which is all well and good, but hardly worth the effort of turning off my 42” TV, rising off my sofa, and forking over fifty bucks for a ticket. Which is also why the tickets were free.

Intermission, twitter: ‘What’s the point of this?’ At which point I realized that, in the twenty-first century, live theater as entertainment is passé. We can chuckle to witty one-liners on over a hundred television channels 24/7. Three hundred hours of video are uploaded to You Tube every minute. In a culture that suffers no shortage of entertainment, live theater demands too much attention, too much focus—and too much money—to simply entertain. It must transcend what a screen can offer.

Later in the season, I attended a performance of Jennifer Blackmer’s Delicate Particle Logic at Watertown’s Mosesian Center. I paid real money to sit in a black box theater, with minimal set and vintage shop costumes to watch talented though fledging actors: an experience much richer than what the Huntington had provided. The story of a Jewish female physicist in Nazi Germany is not sitcom fodder, yet the triangle of politics, love, and science is extraordinary. The simple production left room for the imagination to embellish incomplete details and deduce partially stated truths. The play, and this production, played the only trump card live theater holds over anything created on a screen. Delicate Particle Logic was entertaining, yet also inspiring, thought provoking, and emotionally complex. It demanded more direct connection than anything I watch at home; and more active attention than Sherlock required as well. And since I invested more in Delicate Particle Logic, I reaped a greater reward.

Greetings reader. I am a writer, architect, cyclist and father from Cambridge, MA. My primary blog, theawkwardpose.com is an archive of all my published writing. The title refers to a sequence of three yoga positions that increase focus and build strength by shifting the body’s center of gravity. The objective is balance without stability. My writing addresses opposing tension in our world, and my attempt to find balance through understanding that opposition. During 2015-2106 I am cycling through all 48 mainland United States and asking the question "How will we live tomorrow?" That journey is chronicled in a dedicated blog, www.howwillwelivetomorrw.com, that includes personal writing related to my adventure as well as others' responses to my question. Thank you for visiting.
View all posts by paulefallon →
This entry was posted in Personal and tagged Delicate Particle Logic, Flat Earth Theater, Huntington Theater, Jennifer Blackmer, Sherlock's Last Case, theater. Bookmark the permalink.