There Goes the Neighborhood

Change happens continuously. But we humans only notice it episodically. I’ve lived in the same neighborhood for more than 25 years, a few crooked blocks separated from the rest of Cambridge by Route 2. I call it the suburbs of Cambridge. Like Tottenville is to New York City and San Pedro to LA, Strawberry Hill is within Cambridge’s physical boundaries, but psychically distinct and totally foreign to the hipsters clicking around the newsstand in Harvard Square.

Strawberry Hill residents live further from the Red Line than anyone else in our fair city. In exchange, we have yards, driveways, even a few garages. Our mostly two-family houses were built a hundred years ago or so, at the limit of streetcar tracks. Three blocks east, houses are tucked tighter and priced higher. Three blocks west lies Belmont: Leave-it-to-Beaverville.

Strawberry Hill is Cambridge’s statistical outlier as well. We are more white, more moderately income, more domestically stable than other parts of Cambridge. At least we were when my young family moved here in 1992. In 1996, when I served on our neighborhood study group, I learned exactly how vanilla we are. In a city where most domiciles flip every five years or less, Strawberry Hill residents stay put for over twenty. Why would anyone leave? It’s convenient, it’s safe. We’ve got our own little public library, a cute elementary school, acres of woods at Fresh Pond Reservation, and our nation’s premier garden cemetery (Mount Auburn, 1831, designed by Frederick Law Olmstead). Besides, so many city workers live in this perennially affordable neighborhood: our streets are the first to be plowed, our trash is picked up early. My house is a 121-year-old granddaddy of the neighborhood; I’m only the third owner.

So forgive me if I didn’t notice twenty-six years of change until—boom—it hit me in the face. Or rather, it parked in my neighbor’s driveway.

When I moved into this traditionally Italian neighborhood, neighbors in every direction were named Frank and Marie. Their children lived upstairs, or across the street. Their cousins lived down the block. One Frank told me his family lived far away; Malden’s ten miles from here. Over time, the lucky ones died in their beds, others were ambulanced to nursing homes. Their kids moved to Arlington, maybe Bedford. One by one, houses changed hands, often without even a For Sale sign. The new people were white or brown or yellow, few blacks, even fewer Italians. Strawberry Hill might not so diverse as we proclaim, but we’re still basically middle class, right?

About eight years ago, Marie-in-the-white-house-across-the-street (every Frank and Marie requires a subtitle) died. The house that Marie had lived in since 1926 went on the market. It was an urban treasure, solid construction without a single update, original gumwood trim intact. A nice family bought it, mom, dad, two girls. They renovated it lovingly, adhered to LEED energy standards, installed native landscaping. He’s South Asian; she’s Eastern European. Their children go to the local school, they decorate at holidays, they raise chickens. They’re great, maybe even fabulous.

And then, one day this fall, a Tesla arrives. Not a Prius, not a Lexus, not even an Audi: a full-on Tesla. In their driveway. Sometimes they even park it on the street! My fantasy of a cozy working class neighborhood: blown to smithereens in a single stroke of left-leaning affluence. The academics, the professionals, the technocrats, the learned liberals who’ve replaced Cambridge’s working class in neighborhood after neighborhood, have finally invaded Strawberry Hill. My face burrowed. Then I looked in the mirror. Who the heck am I? A triple-diploma threat, an architect rather than building inspector, let alone a tradesman, I don’t possess a drop of Italian blood or a cousin within miles. I’m nothing more than an early adaptor in Strawberry Hill’s gentrification.

Ever since the Tesla arrived, I’ve been despondent, pining for a neighborhood that probably never existed anyway, bemoaning my role in the transformation even as I’m quietly smug to have gotten into the game so early on. 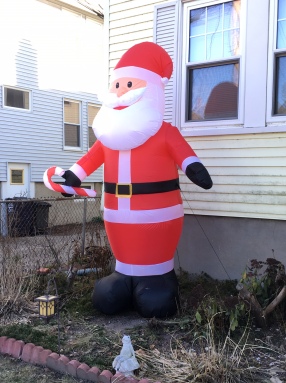 But this week, everything turned bright once more. A few doors down from the Tesla, a larger than life Santa, garish and inflated, popped up on the front lawn where a firefighter still lives (I know this because a fire truck clangs to his children’s birthday parties). It is a tacky counterpoint to the little white lights more and more prevalent here. But it makes me so happy. For at least one more holiday season, Strawberry Hill will not completely succumb to the yawning standards of gentrified good taste.

Happy Holidays to all.

Greetings reader. I am a writer, architect, cyclist and father from Cambridge, MA. My primary blog, theawkwardpose.com is an archive of all my published writing. The title refers to a sequence of three yoga positions that increase focus and build strength by shifting the body’s center of gravity. The objective is balance without stability. My writing addresses opposing tension in our world, and my attempt to find balance through understanding that opposition. During 2015-2106 I am cycling through all 48 mainland United States and asking the question "How will we live tomorrow?" That journey is chronicled in a dedicated blog, www.howwillwelivetomorrw.com, that includes personal writing related to my adventure as well as others' responses to my question. Thank you for visiting.
View all posts by paulefallon →
This entry was posted in Personal, Uncategorized and tagged Cambridge MA, gentrification, Inflatable Santa, Strawberry Hill, Tesla. Bookmark the permalink.

5 Responses to There Goes the Neighborhood