On the day after Thanksgiving, a non-shopper like me has time on his hands. I stumbled upon a satisfying Big Box alternative: the F.A.T. Chain Reaction (F.A.T. = Friday After Thanksgiving). 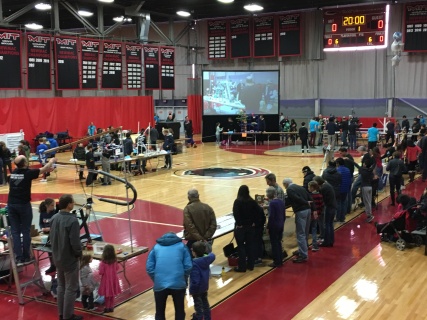 For 21 years, the MIT Museum has sponsored a team-build chain reaction event, though I’d never heard of it until last week, when an invite to volunteer showed up in my inbox. As always, when I say ‘yes’ to something, I get more out of it than I anticipate. In this case, donating a wintry afternoon rewarded me with an inspiring snapshot of humanity.

Here’s how F.A.T. Chain Reaction works. Teams of people—some families, some clubs, some ad hoc geeks—sign up to design and build a segment of a chain reaction. Each team gets one folding tabletop, upon which to construct something that will move a force (a tug of string) from one end of their table to the other end, and impart an equal force onto a string connected to the next table. The force can be transmitted by string: but also ping-pong ball, metal washer, marble, domino, magnetic motor, whatever.

On Friday morning, teams gather and assemble their gizmos on tables lined up in MIT’s field house. The public begins to arrive at one o’clock. They check out the entries while Arthur Ganson, a kinetic sculptor, interviews each team and projects their creations on large screens. The crowd grows. By 3:30 p.m. over 1500 people cram the bleachers and spill out onto the floor. Mr. Ganson makes everyone feel welcome. “These constructions illustrate principles of physics. Sometimes, they may need an extra push, or an external hand. These other forces of spirit are welcome.” A poetic way of saying, don’t sweat a glitch.

The countdown. The initial pull. The chain reaction begins. Two nimble guys with microphones trace the cacophony each contraption makes; two cameramen project the progress of the force on monumental screens. The crowd gasps at each dramatic explosion. We can’t help but pick favorites when three plush animals mounted on photovoltaics teeter along parallel labyrinths, jockeying for the lead until one finally reaches the far end of the table and releases its string. Further on, a ball tethered to the end of a string mounted on a pole winds into a spiral. It unwinds. We can see that the ball must knock against a wooden spoon in order to trigger a row of dominoes. The string winds back upon itself. Unwinds again. Will the ball hit the spoon? A third spin tight to the pole. We hold our breath. The third unspooling. The ball hitting the spoon seems to be the most pressing concern in the world. It just misses. The string spools onto the pole yet again. Unwinds. Voila! The ball nudges the spoon, the spoon pivots against a domino, dominoes fall until the final one triggers the string. The chain continues.

The force moves through 27 constructions, hundreds of pulleys, wheels, labyrinths, musical instruments, and cannons. For me, F.A.T. Chain Reaction is an ideal metaphor for our world: an exercise in collaboration as well as trust. Each group believes in their own concoction, and also harbors faith that their fellow engineers will transmit the force across their respective tables.

Everybody works hard; everybody revels in each other’s success. When an external hand is required, it represents a complementary force rather than a failure. The resulting chain reaction is greater than any constituent part. 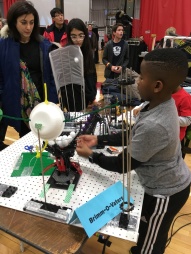 Twenty-two minutes and four seconds after it starts, the chain reaction runs its course. The crowd applauds. The tinkerers pack up. Other volunteers and I dismantle their tables. There are no trophies, no losers; just bright-eyed kids dissembling their contraptions, already conceiving ideas for how they will make them better—next year.

Greetings reader. I am a writer, architect, cyclist and father from Cambridge, MA. My primary blog, theawkwardpose.com is an archive of all my published writing. The title refers to a sequence of three yoga positions that increase focus and build strength by shifting the body’s center of gravity. The objective is balance without stability. My writing addresses opposing tension in our world, and my attempt to find balance through understanding that opposition. During 2015-2106 I am cycling through all 48 mainland United States and asking the question "How will we live tomorrow?" That journey is chronicled in a dedicated blog, www.howwillwelivetomorrw.com, that includes personal writing related to my adventure as well as others' responses to my question. Thank you for visiting.
View all posts by paulefallon →
This entry was posted in Uncategorized. Bookmark the permalink.