If you’re interested in what’s happening at Harvard these days (as everyone in Cambridge is) I suggest you read Hua Hsu’s recent article, ‘School Colors: The Fight About Who Gets into the Ivy League,’ in The New Yorker, October 15, 2018. It’s all there. How affirmative action evolved from being a strategy aimed at leveling the playing field of every stratum in America to becoming a lightening rod in elite education. How it’s more difficult for Asian-American applicants to get into top schools than any other race (including whites). How the conservative right champions this case as a means to permanently topple affirmative action; ultimately helping white kids. And how Harvard defends its admissions process.

The article is thorough. Yet it contains one hilarious bit of irony, and one glaring omission.

The case dates back to 2012, when a Bay Area high school senior named Michael Wang with a 4.67 GPA got shut out of all the Ivies plus Stanford. He is the named plaintiff. But since legal time passes at a much slower rate than even academic time, Michael has already graduated from college. Williams. Not too shabby. Towards the end of the article, Mr. Wang confides to the author, “The education I got at Williams was incomparable to what I would get at Harvard. I still would have gone to Williams, even if I had gotten into those other schools, now that I’ve been to Williams.”

Mr. Wang’s comment doesn’t really make sense, confirming that a 24-year-old’s hubris is scarcely more refined than that of an eighteen-year-old. If Harvard is a Rolls Royce, perhaps Williams is a Bentley; it’s certainly not a Prius. But an education is not a car that you can test drive and compare. Every person extracts something different from the experience. Mr. Wang did not attend Harvard; he cannot compare his William’s education with the education he did not receive.

Even more ironic is the twisted comment about going to Williams, now that he’s been there. Isn’t the whole point of this lawsuit that Harvard is better than Williams? That if Mr. Wang had been admitted to Harvard, he would have chosen it? If Harvard is not preferred to Williams, then where’s the so-called discrimination? Truth is, few of us, at age eighteen, know what’s ‘best’ for us. I am happy for Mr. Wang that Williams turned out to be so good for him. I wish he would realize his good fortune is reason enough to drop this suit.

Which leads to the glaring omission.

Nothing in this article, or the extensive media coverage this case gets in my adopted hometown, states the most obvious aspect of the case: many, many more students are capable of succeeding at Harvard than get the opportunity. For all the angst over the fact that Harvard admits Black and Brown students with lower measurable criteria (offset by qualitative attributes such as life experience or Harvard’s desire for diversity among its student body), no one argues that these Black or Brown students are unsuccessful at Harvard. They are successful. They can do the work. Perhaps not with the same élan as a 4.67 GPA Asian American whiz kid. But they get it done.

I know this because, skin color notwithstanding, I was one of them. In 1973, I was admitted to MIT (not exactly Harvard, but pretty darn close). I accepted, showed up at the introductory picnic, guitar in hand, and realized by nightfall that I was the dubious occupant of the one percentile. In a school where numbers mean everything, trading SAT scores is common as shaking hands. After I met Ben 1560 and Alicia 1520, Tommy 1440, and Kate 1480, not to mention a trio of perfect 1600’s, I knew my measly 1280 combined SAT score was the rock bottom. In four years at MIT I never—I mean never—met another student with lower SAT scores.

So what was I doing there? I graduated from high school in Oklahoma, and MIT wants students from every state. I was demonstratively motivated (I’d already worked in an architectural firm) and, by Tech standards, quite personable. 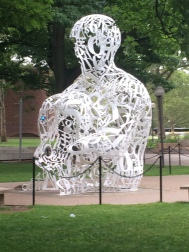 Did I crash and burn? No. I worked harder than many because I didn’t have as much grey matter. Still, I managed to graduate, with honors, continued to graduate school, became a contributing professional, and valuable alumni.

Did going to MIT change my life? Probably more than any single event I have experienced.

Was MIT wrong to tip the scale of geography and accept me over someone with more quantifiable attributes? I don’t think so. In my forty years around Cambridge, I’ve confounded hundreds of New Englanders with the marvels of my fly-over state: an immeasurable contribution to a community cloaked in Puritan snobbery.

Do I feel bad about the ‘more qualified’ applicant whose place I took at MIT? Not really. I figure she probably liked Williams more than I would.

Harvard University exerts outsize influence in our world. Their admissions policies need to be uniform and transparent because a Harvard education is a scare resource that, by design, grows more exclusive, since it’s class size does not expand with our population, while a Harvard degree bestows privilege beyond a mere diploma. Justified or not, Harvard graduates enter adulthood on a higher rung. Harvard admissions also warrant scrutiny due to its chequered record of discrimination against women, Blacks, and Jews, as well as its collusion among fellow Ivies.

But I do not believe the way to monitor Harvard is to abolish an admissions process that includes both qualitative and quantitative measures. Because Harvard is the incubator of our future leaders, it ought to represent our society as best it can. Their process is making strides with regards to race, even as it falls short in other areas (Harvard should admit fewer legacies, more veterans). We can take a blunt ax to Harvard’s qualitative admissions criteria and kill affirmative action. And cripple the aspirations our universities represent: to reflect whom we are, and enlighten who we want to be.

Greetings reader. I am a writer, architect, cyclist and father from Cambridge, MA. My primary blog, theawkwardpose.com is an archive of all my published writing. The title refers to a sequence of three yoga positions that increase focus and build strength by shifting the body’s center of gravity. The objective is balance without stability. My writing addresses opposing tension in our world, and my attempt to find balance through understanding that opposition. During 2015-2106 I am cycling through all 48 mainland United States and asking the question "How will we live tomorrow?" That journey is chronicled in a dedicated blog, www.howwillwelivetomorrw.com, that includes personal writing related to my adventure as well as others' responses to my question. Thank you for visiting.
View all posts by paulefallon →
This entry was posted in Personal and tagged Affirmative Action, Harvard, Hua Hsu, Michael Wang, MIT, Williams. Bookmark the permalink.