Today I participated in the trials of immigrants and the comforts of the established class.

Rolling Forks Motel is representative of dozens of places I have stayed that are owned and operated by Indian immigrants, the vast majority of them named Patel. I have learned that the Patel surname is common in India as Smith is here. Patel’s belong to the merchant caste, so when they come the US they continue to operate businesses. They own virtually every aging independent motel in America (except in the Northern Plains and Northern New England). Many were doctors or engineers in India. Now they collect between $40 and $65 per night to rent serviceable rooms to the likes of me. These m 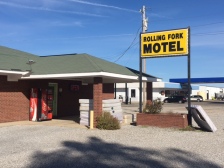 otels are never full; often I am the only guest. Some offer morning coffee, few provide free breakfast, most include reliable Wi-Fi: Indians are tech-savvy.

Most of the Indians I meet running these establishments seem particularly ill suited to hospitality. They are curt, transactional to the precipice of unfriendly. They also seem unaware of American standards of cleanliness. The beds are made and the shower is wiped down, but the lobbies are cluttered and the windows grimy.

When I checked into Rolling Forks Motel yesterday afternoon, the proprietor had trouble getting his credit card machine to work. He fiddled with the register tape and eventually produced a slip for me to sign. I asked him ‘How will we live tomorrow?’ but it was beyond his English.

This morning I got a knock on my door at 7:15 a.m. In battered phrases and hand gestures, ‘Bob’ explained that my credit card had been charged three times. H

e asked me to stop by the office for my refund before I left. Half an hour later he came back and asked for my card. I couldn’t quite understand his intention, but his honest alarm was palpable. I gave him my card; he disappeared, and then returned with the credit receipt. I figured we were finished. Until he knocked again, tablet in hand, and an elaborate explanation about some improperly loaded app. It seemed very important that I understand the error. I gestured that everything was good until he sighed relief.

When I rode away from the dingy place I pondered the hardships of immigrants: to run such a marginal business in such a strange land, to live in constant apology for all that you cannot comprehend.

Forty miles of pleasant riding brought me to Vicksburg, where I spent a lovely afternoon exploring the city and the National Military Park. The stone monuments placed like chess pieces across the hilly terrain help a visitor visualize the opposing battalions. The park is too large to walk, but ideal to view from a bicycle.

I particularly liked the US Cairo memorial, the reconstructed remnants of the torpedoed iron barge. One of the placards described that the 157-man crew were mostly immigrants who spoke as many as seventeen languages. All fighting to preserve their adopted Union.

In late afternoon I pedaled to my hosts, who live in a hand-built stone house of lodge proportion on 1,000 acres with a guesthouse and hunting grounds. Some of the finish wood was salvaged from family structures over 100 years old. We ate deer stew, shot on site, sizzling cornbread and delectable pumpkin pie. We talked about education and law, media and technology.

Important to remember that there was a time, generations ago, when this family was immigrants, just like the Cairo crew and motel owner.