Back in College Station TX I visited the land that inspired my New York born father to pioneer west. Our Conestoga wagon was a Winnebago. His strong-willed wife refused his lead and insisted we settle 350 miles to the north. Our homestead was not 160 acres, but a brick ranch that we could not inhabit until the bankers were satisfied. We did not circle the wagons at night; we parked in the Safeway parking lot. I did not rise with the dawn to help with chores; I unhitched my bicycle from the back of the motorhome and pedaled against the wind to school. To any rational 1971 eyes we lived in suburban America. In my fathers eyes we were battling the elements and conquering the West circa Oklahoma Land Run 1889.

My father’s business never prospered. The bank took back the Winnebago, then the ranch. My parents shuffled among houses and apartments all over town. My mother went to work. My father drank more. Eventually they split. The pioneer returned to New Jersey, his dream unrealized.

Meanwhile, I arrived in Oklahoma with a mop of bad hair, a thick accent, and an urban attitude to match. But I thrived. I landed at University High School in the middle of my junior year, met great friends, dated a terrific girl whom I eventually married, and got accepted to MIT, in part, I am certain, because I applied from a geographically sparse niche. Less than two years after becoming an Okie I shipped out to college. My lasting lesson of heartland was appreciation for all regional attributes our country embraces and the conviction that our commonalities are more plentiful than those differences. 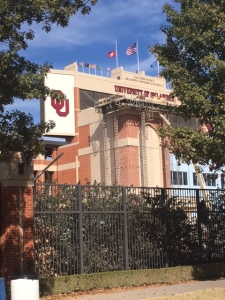 Norman’s physical fabric, so transformed between 1889 and 1973, has stabilized in the last 43 years. True, University of Oklahoma Football stadium is getting enlarged again, like an inflatable toy that refuses to pop: 87,000 seats plus an attached parking garage so fat donors can drive to their skybox. Sure, the commercial strip along I-35 is banal as any in America. But everything else is much the same. OU’s campus is still anchored by a pair of handsome ovals. Main Street storefronts survive despite the big box stores. The wooden bungalows in the older part of town still need a coat of paint. The brick houses in the subdivisions beyond appear smaller only because the trees have grown.

I arrived on Homecoming Day. Campus buzzed with anticipation of the night game against University of Kansas. The parade down Boyd Street could have been a Jimmy Stewart movie: Pride of Oklahoma marching band, cheerleaders, Greek letter fraternities and sororities. But a few boys wore pink shirts with the OU logo, women with cropped hair held hands, interracial couples clapped along with everyone else, one Homecoming Queen candidate was from Mumbai.

When I first came to Norman Mumbai was Bombay, and we didn’t consider anyone from there pretty. Girl’s held hands as a joke, interracial couples hid, and boys’ didn’t wear pink shirts – period. The physical fabric of this college town may be little changed, but the society it supports has blossomed in directions this oxford-clothed high schooler could never have imagined.