I slept fitfully; preoccupied by the night noises of my heavy-set cabin-mate Tom and the half-hearted allusions he made yesterday to pedal out with me today. I knew the guy wasn’t going anywhere. Still, I got up early, left La Loma del Chivo hostel before anyone else woke, and was back at Oasis Cafe when it opened at 7:30 a.m.

I’m on a new riding schedule here. The mornings are dark and cold this far west in the Central Time Zone. The sun warms things up after nine in the morning, and its light ‘til past six. So, I spent two hours in the cafe. By the time I rolled out, the weather was fine. 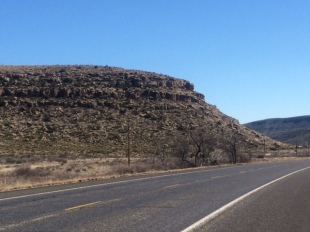 Actually, the weather was more than fine. It was perfect; a light breeze on my back, not a cloud in the sky, and seventy degrees by noon. Despite terrific conditions I was sluggish. Enchiladas with two sunny-side eggs and beans had been tasty but not a bike-size portion. I stopped for a snack five miles out, and again twelve miles out, trying to get my mojo. Just past twenty miles I reached a crest, which coincides almost exactly with the mid-point between El Paso and San Antonio. I began the longest downhill of my trip – a full thirty miles into Sanderson It was great fun going fourteen, eighteen, twenty miles per hour mile after mile.

If yesterday was about assorted people, today was about assorted rocks, and I was content to contemplate less complex things. The geology of Big Bend encompasses three distinct periods. There are vertical up thrusts, the Ouachita fold, that date back more than 250 million years, before the Permian Sea submerged this area. Limestone reefs laid over the folds 125 million years ago and lava layers from volcanic activity a mere 25 million years ago infill some areas and erode others. The result is a variety of jagged, sharp, and worn landforms juxtaposed against each other.

I arrived at Sanderson, the cactus capital of Texas, well before three and enjoyed the outdoor museum where various cacti were planted in and around rocks with faux primitive paintings that illustrate various stages of local history; so much more engaging than an indoor museum on such a nice day. 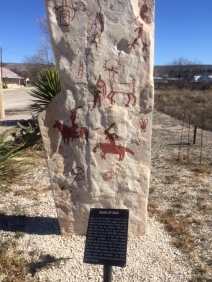 U.S. 90 is part of Adventure Cycling Association’s ‘Southern Tier’; there is quite a bit of bicycle touring activity. I had been told that Danny, manager of the Budget Inn, was particularly nice to cyclists. That is an understatement. He welcomed me to the office, gave me energy bars, asked about my trip, and showed me photos of other cyclists who’ve stayed there, including Georgia and Mark whom I met yesterday.

There is nothing open in Sanderson on a Saturday night. In the evening Danny brought me a silver tray with a pungent potato soup, curried rice with vegetables, and a delicious papadam, then satyed for nice conversation. All for $45 a night! 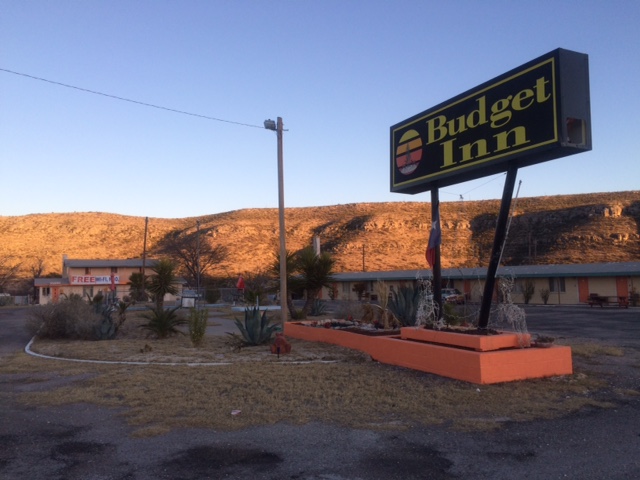