It’s been thirty-five years since I’ve been in LA, so today I caught up with the city’s recent architecture. Downtown is beginning to feel like a real, dense place, although still small considering it’s the center for ten million people. Apartment towers are adding some after-hours life to the streets. The new Ritz-Carlton is the best addition to the skyline. Thomas Moyne’s CalTrans Headquarters is pretty cool, but ultimately just an office block with a very grey exterior. I don’t think it’s so unique as to deserve all the hype it’s received within the architectural community.

The most notable new buildings reflect LA’s cultural ascendency beyond TV and movies. The LA Museum of Contemporary Art looks as ill-scaled and dated as any 80’s building. Across Grand Avenue the new Broad Museum is better; its simple form and deep skin are a good complement to its more famous neighbor: Frank Gehry’s Disney Concert Hall. 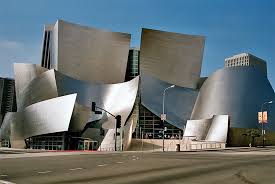 Disney Hall is a very good, very expensive building. The sweeping forms are less arbitrary than in some Gehry buildings. The interior is full of drama, yet the building’s organization is simple and clear. The overlapping lobbies and stairs must be spectacular when filled with stars on an opening night. The structure required to support these sails in earthquake prone California is incredible, all the better that it’s exposed in many places from the inside. There are many excesses – a small concert space open to the lobbies is rarely used, as is the concrete amphitheater that cuts up the already difficult to access third floor ‘public’ park. We could not visit the concert hall as the LA Philharmonic was practicing, but the tour’s video simulation is very informative. The hall is universally praised as an acoustical and aesthetic success. Like much contemporary architecture, the Disney Hall is full of arbitrary stunts; angles, curves and flashy materials that mean little beyond technical whizz-bang. The forms are dazzling, but lack the shared meaning that prosaic features like portico, gallery, and piano nobile have connoted for centuries. I had to ask someone where to find the entrance. What I suppose ultimately makes the Disney Hall such great architecture is that it’s a perfect reflection of our times; technologically superb yet full of extraneous noise; stimulating and exiting, but exhausting as well. 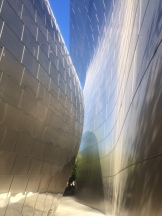 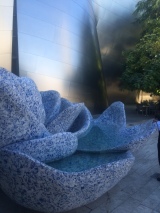 The new cathedral, which is cold and hard inside and out, is less successful in every respect. If there is one building form that’s seeped in meaning, it’s the cathedral. But LA tossed aside millennium of church architecture tradition. People enter the building on the sides and filter into an asymmetrical auditorium. Everything is raw concrete and monochromatic light. The most interesting elements are the fabric panels of saints and believers that address the altar. How much more compelling they would have been if, as in cathedrals before, they were made of glass and glowed from within to bridge the spiritual and temporal worlds. 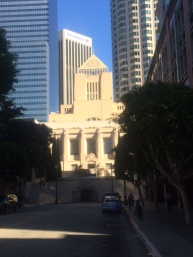 After so much contemporary complexity, I spent a lovely afternoon in the LA Central Public Library, a well proportioned Deco delight.

Two events bookended my downtown LA experience. In the morning I stopped at Pico-Union, a hard-surfaced space where young street artists develop their talent without running afoul of the law. In the late afternoon I cycled through the Hancock Park neighborhood where young trick-or-treaters went door to door. Since it was Saturday in this heavily Jewish neighborhood, there were also dozens of men in black suits with flat brimmed hats walking to synagogue. And I was riding along in garish yellow. I marveled at the cacophony of our costumes: the four-year-old spider man, the bearded gentleman, and the spandex cyclist. 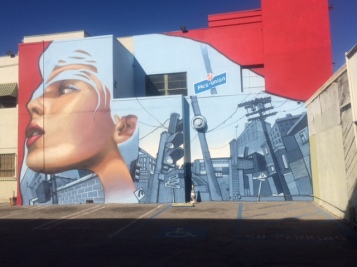 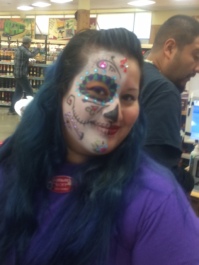 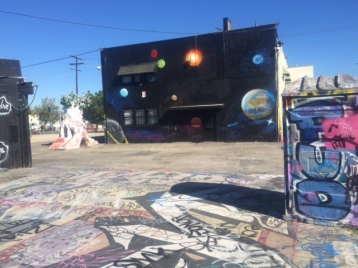