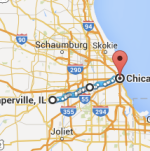 Every time I am in Chicago I remember how much I love this city. It’s got big city amenities, big city feel plus eager, friendly people. Bonnie and Frank, my warmshowers hosts, offered to take me on a bike tour of the city. Since I’ve seen the highlights before, we skipped the lake and Millennium Park in favor of the emerging South of the Loop and Pilsen neighborhoods. The former Germantown is now the center of Chicago’s Mexican community. We picked up Janet along the way and four fit retirees hit the streets. Chicago is a giant playground for architects; everyone is keen on architecture. Bonnie is a docent at the Glessner House, and we stopped often to study arches, lintel and rustication.

We ate breakfast at Neuevo Leon, an amazing Mexican Restaurant whose three dining rooms were packed at 10:00 a.m. on a Monday morning. My chorizo tostadas were delicious, the extra warm tortillas and egg samples a bonus. Everything was generous except the place settings. I have been in three restaurants in the Mid-west that give you only a napkin and a fork. Have knives and spoons not made it across the Ohio River? How am I supposed to devour every bit of the delicious food without using my fingers? 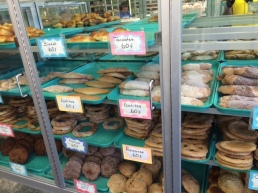 We said our goodbyes and I continued west. My cycling routes often divide into thirds, and today was a classic example. My first ten miles traversed the westward migration of Mexican immigrants in Chicago. I stopped at a Mexican bakery along 21st street – gluttony trumped hunger – to satisfy my sweet tooth. Then I continued on to Cicero, where one side of 26th Street was a huge intermodal train/truck terminal, while the other side was neat Chicago-style brick houses. On to Berwyn, where the houses got further apart but the pick-up trucks still blared Mariachi music. Finally, I hit full-blown suburbs in North Riverside, with malls and long ranch houses, but all the residents were still Mexican-Americans. 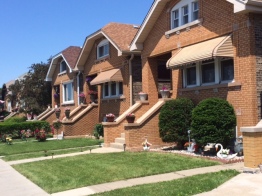 Finally, I popped out in Oak Brook, a lush, very affluent exurb. Oak Brook is the headquarters of McDonald’s and apparently the executives take Happy Meal castles and pump them up to McMansions of enormous size. Brick is passé – the new ones are stone. One turret is a minimum, two or three are better. I saw one house so slick I thought it was still waiting for permanent siding. Then I realized the exterior was polished travertine. Really? In Chicago?

The exurbs are the most dangerous place to cycle. Entitled people in big cars have no patience for the rules of the road. At one intersection, after I waited to get a crossing sign, six cars cut in front of me for their right turn. Along one stretch a thin, tan woman with dazzling earrings slowed her SUV down enough to scream ‘Sidewalk’ at me, before gunning off and giving me a mouthful of exhaust. Even though by law I am supposed to ride on the road, I followed her unwelcome advice and took to the sidewalk for self-preservation.

I took a long afternoon break and waited out a serious thunderstorm, then got to my old high school friend David Klippell’s house in Naperville around six. It’s been more than twenty years since we’ve seen each other. David, his fiancé Charlene, daughter Karen, and I enjoyed beers and enchiladas. David, a carpenter, showed me all his handy work. Then we stayed up too late talking; we had a lot of catching up to do.