When I was a boy, fresh off President Kennedy’s, “Ask not what your country can do for you, ask what you can do for your country,” every little boy wanted to grow up to be President. Do little boys still want to grow up to be President? How about little girls? The glory being President seems tarnished these days, especially when you can aspire to be Elon Musk or Jeff Bezos. Still, when it comes to power, prestige, and permanence, there’s no other position quite like President of the United States.

Every modern President, even motley ones, get a permanent archive to store their stuff, and a permanent museum to polish their image. I’m fascinated by these repositories of objective fact and political spin: so much so that I’ve visited all thirteen ‘official’ libraries, from Herbert Hoover straight on to Bush 43. Each reveals the man it exalts—all men so far—in a positive light, yet each reflects his core in ways certainly unintended. Bush 43’s library has extraordinary security; Jimmy Carter’s has none. Eisenhower’s museum is mostly about World War II; Nixon’s is mostly about what’s left out. Kennedy is high-minded; Reagan is blindingly sunny. FDR is rife with specific achievement; Bush 41 is fuzzy. Clinton has the most impressive interior: modeled on Trinity Library in Dublin, but locals call the silver extrusion extending over Little Rock’s Arkansas River, ‘trailer trash.’ LBJ’s is my favorite. That man’s sense of humor towered over all his failings. No other President has to hutzpah to hang this introductory panel on his permanent record: “If one morning I walked on top of the water across the Potomac River, the headline that afternoon would read: ‘President Can’t Swim.’”

More interesting than the style and content of Presidential libraries is my personal response to each one. The libraries span the entire length of my memory, as well as the stories passed down from parents and grandparents. I have lived from Eisenhower forward, and heard about Truman, FDR, and Hoover first hand. I never heard a single story of life under Coolidge or his predecessors. FDR, Eisenhower, Kennedy, LBJ: the displays in these libraries resonate with my own experience. Reagan and the Bush guys are more interesting in how they portray an America at odds with my understanding during their time. 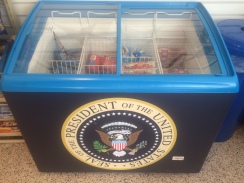 Which leads, inevitably, to considering how each of these Presidents aligns with my boyhood fantasy. If the Internet had a quiz, Which President would you be?, how would I fare?

The results are sobering. Years ago I discovered that my Meyers Briggs type (INTJ) is the same as Richard Nixon. Yikes! Now, thirteen libraries later, I realize that my capabilities most closely match one our least liked leaders. Herbert Hoover directed his engineer’s disposition into a huge fortune, and then used those same talents to stave hunger during World War I. His humanitarian efforts made him so famous he was elected President by a huge margin—his only elected office—yet within a year of attaining that office he was universally reviled. The man believed that volunteerism and civic duty would be enough to raise us out ofthe Great Depression. He possessed not have a single political bone in his body; he did not know how to rally support, to inspire. When we needed messages of hope, he delivered dictums on hard work.

After getting trounced by FDR, who possessed the right stuff to inspire us out of the Great Depression (along with a Second World War to drive the desired economic excess), Hoover licked his wounds for years. Until Democratic President Truman, tapped Hoover to oversee famine relief after World War II, and the man is credited with feeding millions again.

I came away from the Hoover Library thankful that my boyhood fantasy never came to pass.

Greetings reader. I am a writer, architect, cyclist and father from Cambridge, MA. My primary blog, theawkwardpose.com is an archive of all my published writing. The title refers to a sequence of three yoga positions that increase focus and build strength by shifting the body’s center of gravity. The objective is balance without stability. My writing addresses opposing tension in our world, and my attempt to find balance through understanding that opposition. During 2015-2106 I am cycling through all 48 mainland United States and asking the question "How will we live tomorrow?" That journey is chronicled in a dedicated blog, www.howwillwelivetomorrw.com, that includes personal writing related to my adventure as well as others' responses to my question. Thank you for visiting.
View all posts by paulefallon →
This entry was posted in United States and tagged Hoover Library, Nixon Library, Presidential Libraries, Reagan Library. Bookmark the permalink.