Suicide Walk to the Sea

In 1978, the closing shot of Coming Home is Bruce Dern, as Marine Captain Bob Hyde, hanging his uniform on a lifeguard stand and walking into the Pacific Ocean at a funereal stride. He has lost the war, lost his wife, lost his purpose. He retreats, head high towards death, rather than remain in a world whose values have skewed from his truth: the right of might.

Fifty years later, the closing shot of Beatriz at Dinner is Selma Hayek, in the same jeans and shirt she’s worn the entire film, striding into that same Pacific Ocean after dinner with six 21st century money chasers, the high priests of our current morality. The camera shifts up. We look down upon the sea swirl until Ms. Hayek disappears, then we follow her path beneath the bubbly surface and emerge, at last, into the tranquil mangrove that our heroine has been paddling intermittently, in dream and in memory, throughout her last, suffocating day in Southern California.

When Bruce Dern walks into the sea, I feel sorry for the man of principle, yet I’m relieved for our society that his wrong-headed scruples have been discarded. When Selma Hayek walks into the sea, I am glad that she has found eternal peace, yet devastated that such peace can only come through terminating the reality of life on this earth.

Beatriz is a healer, a seer, a person in touch with every living thing. She makes her living laying her hands, and her spirit, on cancer patients. A low-paid calling, to be sure, that she supplements with hands-on work for wealthy clients, whose liberal inclinations demand they invite Beatriz to stay for dinner after her old car breaks down, yet whose privilege does not extend to Beatriz actually questioning their values. Values that encompass only what can be touched, claimed, and purchased. Values that do not recognize the concept of ‘enough.’

I wonder whether the makers of Beatriz at Dinner had Coming Home in mind when they chose to end the film with Ms. Hayek’s walk into the sea. For me, the connection was immediate, and profoundly tragic. When Bruce Dern disappears, we lament a good man out of step with his time yet we celebrate time moving away from authority, toward tolerance, empathy, and understanding. When Ms. Hayek vanishes beneath the waves, she takes that empathy and understanding with her. We are left with nothing but hollow greed. 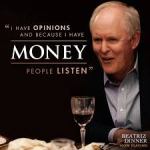 Fifty years forward, if another character in another film walks into the sea, what beliefs will he wash away? What morals will she leave behind? That will depend on what values we nourish between now and then.

Greetings reader. I am a writer, architect, cyclist and father from Cambridge, MA. My primary blog, theawkwardpose.com is an archive of all my published writing. The title refers to a sequence of three yoga positions that increase focus and build strength by shifting the body’s center of gravity. The objective is balance without stability. My writing addresses opposing tension in our world, and my attempt to find balance through understanding that opposition. During 2015-2106 I am cycling through all 48 mainland United States and asking the question "How will we live tomorrow?" That journey is chronicled in a dedicated blog, www.howwillwelivetomorrw.com, that includes personal writing related to my adventure as well as others' responses to my question. Thank you for visiting.
View all posts by paulefallon →
This entry was posted in Personal and tagged Beatriz at Dinner, Bruce Dern, Coming Home, Selma Hayek. Bookmark the permalink.