My first day of fall foliage! Golden leaves along the South Platte as I headed south out of Denver. I followed the greenway all the way beyond the out loop (E-470) and then climbed to the Chatfield Reservoir. Like most water in the West, it sits high and offers spectacular views in all directions. 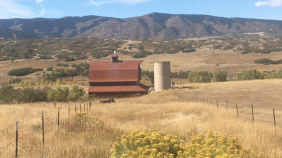 After another unavoidable segment on gravel, which included carrying Tom over two railroad tracks, I followed the shoulder of US 85 for a short time until I turned onto Colorado 105 south for thirty miles of exquisite mountain scenery. Just as the noon siren sounded in Sedalia the wind picked up hard and fast and blew straight at me while I climbed 2,000 feet to Palmer Lake. By the time I reached Monument my thighs were burning. Still, I was astonished when the Colorado Springs Valley opened before me. The hazy sprawl that extends more than twenty-five miles along the I-25 corridor was a shock after miles of pristine countryside.

I navigated most of that distance on unfriendly six-lane roads lined with big-box stores. Eventually, I reached the Pike’s Peak Greenway, which follows Monument Creek in the shadow of I-25 through downtown, incidental as that is. Colorado Springs is a transient town with four military bases where everything appears to have been built in the last ten years, at SUV scale. I didn’t see any place pedestrian friendly or rooted in history. By the time I reached my host’s apartment on the far south side of town I was ready for a hot shower, good food, and stimulating conversation. All of which Lilly and Kyle provided.