I am like an eight-year-old. I ride my bike all day and sleep like a baby all night. After ten solid hours in the sack I woke to full daylight. My home-schooling hosts were still snoozing when I got on the road at 8:30 a.m. I figured, no problem starting late on a short riding day. But the wind had picked up; its angle less benign, and there was no coffee or breakfast to be found in Bennington.

I pedaled for 32 miles along Highway 18 weary, despite two snack breaks, until I reached Lincoln and discovered the Sunrise Cafe. Today’s special: meatloaf, creamed peas, baked potato, salad bar, roll and peach cobbler, plus coffee for $8.25. Excellent conversation with local customers and a snappy waitress came free of charge. 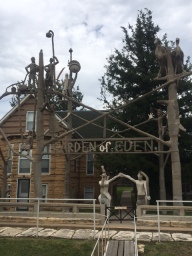 Real food in my belly and caffeine in my veins blunted the wind on my cheeks. I arrived at Lucas, Grassroots Arts Capital and one of Kansas’ 8 Wonders of Art, in plenty of time for a full tour of the Garden of Eden. I also got see, and use, the world’s most fantastic public toilet. Kansas proclaims ‘Wonders’ of all kinds, and Lucas is plenty neat, but grassroots art can’t stop the place from hemorrhaging a slow death. Having a gorgeous mosaic public bathroom is nifty, but when the only grocery in town is shuttered, that’s a real problem for a town 25 miles from anywhere.

There are no motels in Lucas. I had called a listing for Thacker’s Cottages looking for a place to stay. Mr. Thacker explained that he rents cottages by the week or month. Then he offered, ‘How much do you usually pay?’ I said “$50.” He replied, ‘Stop by, we’ll fix you up.”

Three blocks west of the public toilet, Mr. Thacker owns a couple of houses on the border of town. His dog barked before I even pressed the bell. He took me to a house next door. The place sleeps five, has a full kitchen and dining table big enough for Thanksgiving. It was clean; all the beds fitted; the AC already on. He’d stocked the fridge with water and Gatorade. “Don’t drink the tap water; it’s got too much lime.” 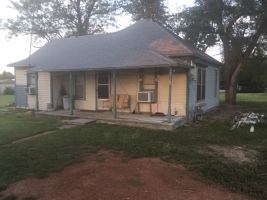 He told me his litany of seven back surgeries, how he had to give up horseback riding; how he’d swallowed a mosquito and got West Nile Virus, how he was luckier than the guy who lived in Mr. Thacker’s trailer around the corner for free. “When I was a fool teenager the jack slipped from a car I was under. My chest was crushed; I couldn’t even holler. He pulled the car off me; must have been the adrenaline let him do it. He saved my life. Now that’s he’s feeble, I owe him.”

After a good amount of visiting, I surmised that Mr. Thacker wasn’t actually going to charge me to be his neighbor for the night. So I suggested we settle up and gave him $50 in cash. Half an hour later, I got a knock on the door. He brought me a taco salad and saltines for dinner.