The Ronald Reagan Library is the first Presidential Library I have visited on my trip, and it’s inspired me to pedal to more. So-called Presidential Libraries are a modern invention. Part library, mostly museum, and total spin, every president of my lifetime is enshrined in a monument of his greatness. The Ronald Reagan Library conformed to my expectations in many respects. It’s a reproduction California Mission structure on a gorgeous site. The docents I met were all middle-aged, tan, well coiffed Californians; Reagan’s most popular demographic. But I was surprised at the size and diversity of the visitors. The place was packed on an October Thursday morning with a broader array of diversity than I expected. In the 35 years since he was elected our country’s politics have shifted so far right, that Reagan is now a centrist, and sometimes even a liberal hero.

His actions are presented in sync with current tastes. Displays about how he stood down free speech advocates during campus unrest while governor of California also stress how much he increased funding for education. Descriptions of his environmental achievements fail to mention how James Watt, his Secretary of Interior, dismantled the environmental movement. But more important than how the curators tweak the message to popular taste, the Ronald Reagan Library illustrates how events, often beyond the control of the President, shape his legacy. Reagan got a huge boost when the Iran hostages were freed on Inauguration Day. Then, 71 days later, he was shot and survived, and the United States had our first bionic president. The guy was sharp and he was a great communicator, but he was lucky how events conformed to his message. Under Reagan, Americans could really believe we are a special people. 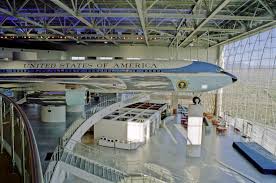 The building is well organized and sited, but the museum itself is terrible: cramped, cluttered and chaotic. I came to dead ends several times. The Air Force One Pavilion, however, is terrific. It’s great fun to stroll through the plane that served eleven Presidents. The control panel where the nuclear codes and black box were kept was eerily like the ones I witnessed in North Dakota’s Missile Alert Facility.

Simi Valley is not all that close to LA. I cycled many miles up and over Santa Susana Pass, against Santa Ana headwinds, before I landed in the San Fernando Valley. Fortunately, I had a nice bike path along the dedicated Orange Way bus line for over ten miles. However, the last five miles, along Ventura Boulevard at rush hour, were dicey. I have never seen so many stores that cater to the beautiful body. Want a gym? Massage? Cosmetics? Mud bath? Pilates? Tummy tuck? Laser hair removal? Fat freeze? Aroma therapy? Yoga? Herbal elixir? It’s all on Ventura Boulevard in Studio City, TV Capital of America.