Today I sing an ode to Surly, my phenomenal bicycle. I started the day in the mountains. Google suggested a route of local roads that shaved five miles, and 3,000 vertical feet, off the highway route. Ever leery of dirt roads I vetted the route with the manager of the hostel. She explained that the roads were paved but advised against them since they had no shoulder. She was right in that the roads had no shoulder, or even a yellow line. But since no cars overtook me in over 25 miles, road width was not a problem.

Unfortunately, she was incorrect about pavement. Over fifty miles on county roads, about ten miles were gravel. But Surly handled the ruts, soft patches, and skull-shattering serrations shaped by pick-ups with her usual dependability.

I discovered a new phenomenon: people living in trailers with a small utility building on their property.  Permanent pace for water and power, movable for people.

I traveled from mountains to foothills to rugged chaparral; one of the most beautiful rides of my trip. I had a good lunch break at the Raymond General Store, and then continued through ever-gentler hills, ever less vegetation. Twenty-five miles outside of Fresno I joined Highway 41, and was glad I didn’t take that busy road the entire route. 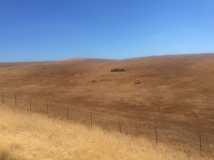 The most challenging cycling is always getting into and out of major cities, but Fresno set a new standard for confusion. When 41 turned into a freeway, I was diverted onto Business 41. A few turns, no markings, and I was heading west on Avenue 9 in the company of inpatient drivers. I about faced. A river separated me from the city. My map showed Avenue 9 crossing under the freeway where an old bridge spanned the water, but the road did not exist. Instead, there’s a new children’s hospital. At the far end of campus I spotted a bike path. I needed to get on that! Unfortunately a tall fence divided me from my desire. Eventually, I accessed the bike path by cutting through the hospital’s helipad. Against the rules, for sure; possibly against some law, but it got me onto the path, over the bridge, and into Fresno.

I saw my first olive trees, which are a beautiful silvery green. Across the road a huge development was under construction. If we don’t have enough water to grow crops, we can pave the groves. 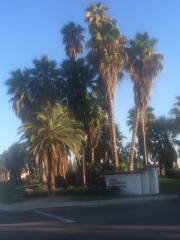 South of the river, everything was sun and palm trees. Fresno is my first place with a Southern California vibe: wide streets, big cars, harsh sun and expansive ranch houses that march on for miles. A new variation on the American Dream, and so very appealing.