I got on the road before eight for a sweet ride to Altoona. Even on short days, clocking miles in the morning is always best. For the first ten miles I had plenty of company; there were more cyclists and runners in health-conscious State College than vehicles on this postcard perfect holiday morning. The next ten miles took me through beautiful rolling countryside and into the village of Spruce Creek, where I enjoyed a breakfast break along a shady spot on the road overlooking the Juanita River while fly fishermen in waders stood silently flipping their lines into the stream. 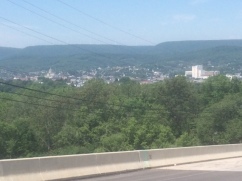 Kettle Road is a slow, steady climb past limestone caves and stately stone farms. The road gains in grade until it opens up to reveal the City of Altoona, and then it dives into town. 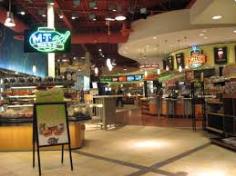 I spent some time at the original Sheetz, a PA convenience store chain that started in Altoona and is universally described s ‘very good gas station food’. After a bit of blog time, I arrived at my warmshowers hosts’ home.

The best way to describe Deb Greene is simply to say the world would be a better place if there were more like her. When I knocked on the door of her typical Altoona row house she exclaimed, “My cyclist is here!” She directed me to the shower, and when I returned downstairs, clean, introduced me to the family members assembled for a Memorial Day picnic: mother, daughter, granddaughter, sister, boyfriend, boyfriend’s son, daughter and husband, nieces, nephew. Pretty much every kind of relation within modern families gathered around the deck eating, drinking and talking. They all welcomed me, asked about my adventure and reveled me with tales of Altoona.

I asked Deb where she liked to cycle. “Oh, I don’t cycle. I ski and kayak. I just signed up to host on warmshowers because I like people.”

About two hours in, on my second dessert, Kelly Chernetich, reporter for the Altoona Mirror showed up. Deb had called the paper, told them they should interview us, and Kelly came right over. After the media left, I switched to Yuengling and we kept talking until the sun set.

Places like Altoona, declining rust belt cities with houses so close you can touch your neighbors, are easy to dismiss as economic has-beens, populated by people who stay put to maintain family ties rather than chase economic brass rings. In my travels, I’ve spoken with many people who seek a stronger sense of community in their tomorrow. But at Deb Greene’s in Altoona, community thrives and passing cyclists are invited to join in.