In Testament of Youth, Vera Brittain writes, “most of us have to be self-righteous before we can be righteous.” This implies that we go through the storm and come into the light. Though I agree that the self-righteous are intolerable, in my experience, the righteous are not all that much better. All too often a righteous person sets himself above another, usually in the service of keeping them oppressed.

I learned this as a Catholic child when I overheard a fresh-scrubbed young priest counsel my mother to stay with a husband who beat her. And as an adult when Evangelical missionaries proclaimed they loved Haiti because it enabled them to do God’s work; as if poor Haitians existed for no reason other than to salve wealthy consciences. 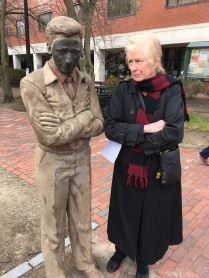 My disdain for righteousness informed my governing principles of life: give no unsolicited advice, offer no uninvited commentary, make no judgment. Try to live by the golden rule, and perhaps that rule will take root in myself and in others.

Recently, however, I’ve been bending these principles. In our increasingly uncivil society, bestowing quiet respect on others is insufficient against the swirling vortex of entitlement and meanness. These days, when people violate the basic fascia of society, I sometimes call them on it.

Before, when a person walking down the middle of the sidewalk glued to their cellphone caused me to stop my bike before I struck them, I stopped cold and when they finally lifted their head, I glared at them in silence. Now, I say, ‘Please watch where you are going.” Or if I’m feeling smart-alecky, “Please pay attention to the world around you.”

Before, when someone’s cellphone went off during yoga class, I heaved a sigh of disruptive meditation and did my best to refocus. Now, after class I remind the person that it’s inconsiderate to bring phones into the studio.

Before, I held back my pedals as one, two, even three motorists turned left after the yellow light had turned red. Now, as they hog the intersection that has turned green for me, I wag my finger in their direction. I don’t proceed—having right-of-way won’t matter much if I’m dead—but I do convey that their violation is noted. 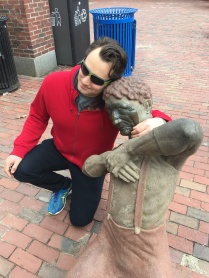 All of these people know, in theory, that they’re supposed to mind where they walk, leave cell phones off during class, and obey traffic signals. Yet each does as they like, in the moment, because our sense of personal entitlement has eclipsed our social norms.

These are minor examples of selfish behavior; yet the foundation of society is mortared by countless small considerations. I even take a risk in calling folks out on them. The fuss and fluster a woman recently made when her cellphone rattled during half-moon illustrated that she know it was wrong. When she continued to make excuses (but no apology) after class, and I told her she should leave her phone outside during class, she shouted at me, “You’re nasty.”

It’s distressing to witness someone who I am 99% certain thrives along the Hillary Clinton / Elizabeth Warren political axis, rip a page right out of Trump’s playbook. Instead of apologizing, acknowledging, or simply taking a cleansing breath (after all, we were in a yoga studio), the woman raised her voice and amplified the stakes through insult. Yet another example of turning the tables to deflect that it was she—not me—who behaved badly. 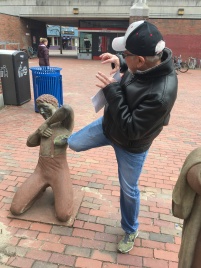 I’ve been called a lot of things in my life, not all of them pretty. Unfeeling, smartass, prig. When those words fly my way they stick to my psyche, prompt self-examination, and often lead to improved behavior. But ‘nasty?’ Never been called that before; and hard to believe it fits.

I don’t really want to be called righteous either; the word is still loaded with overtones of power and privilege. But I don’t want to live in a society where people violate whatever norms they choose, and defend themselves by a loud offense. And so I will continue, calmly, to point out large and small ways in which we disrespect one another. I may get called ‘nasty’ again, or worse. I accept that as a righteous risk.

Greetings reader. I am a writer, architect, cyclist and father from Cambridge, MA. My primary blog, theawkwardpose.com is an archive of all my published writing. The title refers to a sequence of three yoga positions that increase focus and build strength by shifting the body’s center of gravity. The objective is balance without stability. My writing addresses opposing tension in our world, and my attempt to find balance through understanding that opposition. During 2015-2106 I am cycling through all 48 mainland United States and asking the question "How will we live tomorrow?" That journey is chronicled in a dedicated blog, www.howwillwelivetomorrw.com, that includes personal writing related to my adventure as well as others' responses to my question. Thank you for visiting.
View all posts by paulefallon →
This entry was posted in Personal and tagged bad behavior, righteous. Bookmark the permalink.