When I was a pudgy seven-year-old with a girder & panel construction set and a binder full of house plan sketches, Del Webb was on the cover of Time Magazine. This meant that Del spent a week in the center spot on our coffee table. I read every word in the five-page spread about the master developer who built casinos, museums, missile silos, and, ultimately, turned raw desert into an entire community dedicated to adult play. Despite building Las Vegas’ Flamingo Hotel, the LA Museum of Art, and our country’s first enclosed shopping mall, Del Webb’s boldest stroke was Sun City’s curved streets lined with pastel cottages. It wasn’t the houses so much as the idea. Retirement wasn’t an end; it was a beginning; another opportunity for Americans to reinvent themselves. I studied the photos of grey-haired men playing shuffleboard and the big-haired women laughing at bingo. I didn’t know anyone like them, but I liked the idea of escaping my childhood home of too muc

h noise and too many stairs, of living in perpetual sun with a pool and golf course in my backyard. I didn’t know then that swimming makes me claustrophobic or that I’d never break 140 in golf.

Three years later my grandmother, recent widow, became the first resident of Leisure Village in Lakewood, NJ, a pastoral gated community with lakes and pools and ceramics studios. In no time I stretched the limits of my bicycle adventures and rode ten miles from Toms River to spend the afternoon with my beloved grandmother and her newfound friends; all single women. A world of flowered print dresses, root beer floats, and afternoon bridge that I adored. 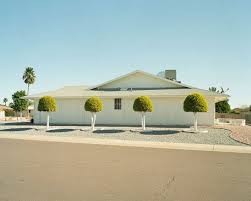 I’m almost the same age as my grandmother when she joined the active retirement community she lived in for 28 years; the longest she lived any place in her life. In the past 55 plus years we’ve all come to consider retirement a distinct phase of life, a phase that gets longer every year. Sun City, and the thousands of other 55 and older communities across our country, played a significant role in shaping that view. Of all the ‘Utopian’ communities I’ve visited – Oneida, Seventh-day Adventist, Chrysalis Cooperative – none has had as broad an impact on how we live today, and tomorrow, as Sun City. Ironically, Del Webb wasn’t trying to do anything utopian at all. He was just trying to make a buck.

I spent a leisurely morning with my Sun City hosts Trudy and Larry. Larry had to leave for a 9:10 tee time. Trudy was around until Ukulele club in the afternoon, followed by her first ever voice lesson and a small group for dinner. I pedaled through acres of winding streets of single story homes to interview the Director of the Sun City Visitor Center. Like everyone who works in Sun City’s seven recreation centers or eight golf courses, Paul Hermann wears a loud Hawaiian shirt. Who knew Trader Joe’s stole their uniform concept from a retirement community?

I visited the Sun City Museum, located in the first model home. It was boxy and small, not nearly so spacious as my youth envisioned. Still, the midcentury modernity appealed to the times: 100,000 people visited Sun City on opening weekend and Del Webb sold 12,000 houses within the first year. 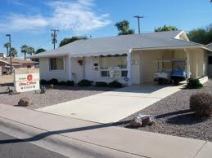 I pedaled east along the Arizona Canal Path, through Glendale, Phoenix, and Paradise Valley into Scottsdale. I left the over 55 crowd behind and stayed with a group of PA students in the their 20’s. The weather was unseasonably cold and overcast. The sun finally broke through very late in the day. Odd that it never shone in Sun City.